Have a Nice Day – #HeritageMan 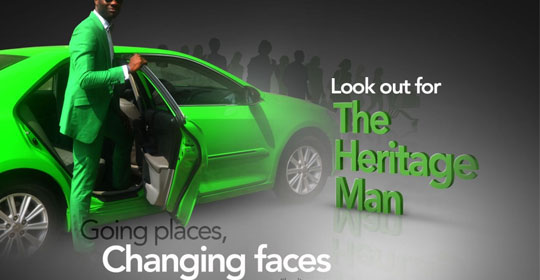 We’re in business to actually touch the lives of regular people – people with vision and dreams. We recognize that these people have days filled with moments that punctuate their overall experience, and add up to what they see as “life”. We at Heritage Bank realize that we can change society one moment at a time, moments that matter to a single person at a particular time. We came to believe that if we can just manage to step into those moments and cause different people to each have a nice day at some point, we might set something in motion that indeed lives beyond us.

The Have a Nice Day Campaign is an experiential marketing campaign centred on an enigmatic character: The Heritage Man, and is effectively designed to go on for just one month – from the 1st to the 31st of December 2015.

The Heritage Man, dressed in a green suit, green bowler hat, a white shirt and a grey bow tie, moves around Lagos in a green salon car with the word

“HERITAGE” clearly engraved on the license plate. He stops at such places as shopping malls, restaurants, bus stops, cinemas, bukas and hospitals, to pay bills incurred on the spot by people he meets at random, and bids them Have a Nice Day, from Heritage Bank “ your timeless wealth partner.

On his first day out, he paid for a 60″ LCD TV for a particular woman at The Palms Shopping Mall in Lekki and paid for Mongolian hair, beauty makeovers and weave-on fixes at Ikeja City Mall. He was at Shoprite in Surulere, Coldstone and Chicken Republic, paying bills and making out time to have his picture taken with dozens of delighted people. On his second day out, he paid off bills for different ailments at the General Hospital, Ikeja, paid for lunch for about 150 staff of the Lagos State Government at the Alausa Secretariat Canteen and was eventually seen handing out airtime recharge cards to motorists stuck in traffic on the Third Mainland Bridge! He might just show up in your neighbourhood!

The “Man in Green” has indeed opened the gates of everyday goodwill, in his own little way. And as he continues to utter those words clearly, we are optimistic that everyone can at some point do even the smallest acts each day that might make the difference between someone – anyone at all – being crushed under the weight of a really tough time, and being able to indeed HAVE A NICE DAY.